Grimm Dreadly wrote:
okay, first up i like both hardcore and metal, trust me i don't think anyone can listen to just hardcore al the time, i can't listen to hatebreed, terror, or walls of jericho all the time, i need some pantera or superjoint, or in flames, too. secondly, i'm 22 bitch not 10, and an emo band would still be gay even if their name was something heavy like gwar or anal pussycat. and lets get one thing straight you little queers, I don't drink or smoke because when i'm high or drunk i'm not angry, and i love being angry. also yes i do fight for fun, as i'm constantly training for mixed martial arts cage fights in my area, which through 10 bouts i've won 9 and and lost the only one that went to decision. six won by knockout, three by submission. and instead of f*cking myself i'm gonna go f*ck my girlfriend, which is the only thing i find mor fun than beating someone half to death.

whatever helps you sleep at night,buddy.you take life way to seriously,and charge everyday life like you actually make a difference,but your gonna have a heart-attack.you remind me of those extreme dudes from herald&kumar.go jack off to some hatebreed videos or something.

there was a young fellow named phil, who was screwing a girl, as boys will.the girl had a knack of screwing right back,the instincts not easy to kill.
Top

I dont really like MCR, but they're better than Eminem or 50 cent...

I, as well, like metal. BTW, berettablowjob, that was an awesome movie! XD 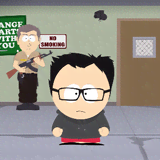 MCR sucks shit from the ass of a shitting elephant.

When you think about it, this whole thread is pointless. If there were a thread for every band in the world... well you get the picture.

Still, you'd think people could talk about it in a civilized manner. 8/
Top

Still, you'd think people could talk about it in a civilized manner. 8/

Oh come on.Where's the fun in that?

hainted wrote:I'd like to make a huge bonfire and throw this band in it.

there was a young fellow named phil, who was screwing a girl, as boys will.the girl had a knack of screwing right back,the instincts not easy to kill.
Top

my first point is that people like grimm deadly are the type of people that make me ashamed that i LOVE the band terror and most hardcore for that matter.

secondly, anyone who comes in this thread and says that they hate ALL emo has never heard good emo before. there are lots of different types of emo, too. there are some really amazing emo bands from the 90s that will never be topped. examples: texas is the reason, saetia, rites of spring, city of caterpillar, and orchid. there's also a lot of bands that have been around since 2000 that are the reason i still listen to a lot of emo. examples: louise cyphre, the olive tree, funeral diner, tunes for bears to dance to, stop it!!, and tons more.

if you say you hate all emo, you should expand your horizons. especially if you like punk rock or hardcore or metal or whatever, there's lots of emo bands that people primarily into that stuff would LOVE (orchid is frequently called an "emo violence" band because they're so heavy and fast).

Mr_Jefferson_killed_Kenny wrote:I dont really like MCR, but they're better than Eminem or 50 cent...

I thought that The Black Parade was pretty good. It has a few really good songs, but it's not better than Three Cheers for Sweet Revenge.
Art is what happens when you learn to DREAM!!! -Atlantis Squarepantis

MCR isn't better than anyone.

Eminem actually trashed on stuff like Britney and N*SYNC and Christina Aguilera in his videos.That has to be worth more than MCR who are just another band of wussified sissies running around in eyeliner whining.
Top

1. The Black Parade isn't horrible, but I wouldn't spend money on it, or time downloading it. All their other songs suck.

3. Hainted, I don't care about the videos. I hate rap. I hate some rap more than others, but I hate all rap. In my opinion, MCR is better than any rap.
Top

you shouldn't insult mcr. the guy who made this thread probably wanted people to say if they liked them or not. the same thing happened to Cartman_66 when he made an OC thread. They all started saying "i can't believe you watch that crappy show, it sucks" or stuff like that. Don't you guys have some respect???
You wouldn't like it if it happened to you.
LOVE BUTTERS? WANT TO SEE A GREAT BUTTERS SITE? THEN VISIT: buttersapples68.piczo.com
Top

Mr_Jefferson,can't you hate both? I sure do.

Kenny,myself I don't mean anything personally against anybody here,it's just that I think that bad music should be shunned to prevent a further outbreak of bad music and to help keep better music more popular and more abundant.We can't say that every artist is good.Even American Idol knows that,lol.
Top

I saw a live performane by them on MTV2 and i was really impressed by it.
Top

Im seeing they again in March for their latset album tour, serously cant wait. And i noticed a few comments saying the first album sucks well all i can say to these folk are yeah thier released singles are mince but listen to the last track "I never told you what i did for a living"............ so so sooooooooo good (although very emo)

it's still true emo sux, but i have to say that if i had to choose between MCR or mainstream rap i'd have to go with MCR. i may hate emo but mainstream rap is quite possibly the worst music on the planet. but underground rap is almost as great as hardcore and metal
Top
Post Reply
109 posts