The "Introduce Yourself Here" Topic

hello, kinda new here so excuse the noobish ways i attempt to communicate

i send my hello from texas, and before you bombard me with hate or ridicule (which i seem to notice from some other people on different sites) i'd like to say it is a pleasure to meet all of you

sorry if i get off topic....oh hell now i'm writing too much, i apologize for that.
Top

Heyheyhello there, mah mens and wimmens and crab people if any.

Here, I'm LWBMatt, but a careful reading of my username reveals that I'm also Lolwutburger on deviantART (who moved to a different account under FluffyMystic, so go there).

I like South Park as much as the next guy because if I didn't then I wouldn't be here.

Anyway I do South Park fanart on deviantART, and I usually try to make it as show accurate as possible. I also post crap on reddit. And that's about it.
fluffymystic.deviantart.com - my deviantART
Top

hi. my name is blueberry, im from poland and usualy im quite awesome, imho.

Howdy yall!? Brazilian guy with some free time and no idea what to do with it (which is why I'm here right now of course) coming.

Am I supposed to talk about myself? Hm, let's see... nah, no ideias for now. But I knew South Park in my english class around 2003 (??) when my awesome teacher showed us Uncle f*cker out of nowhere and I definitely hated it, the song stuck in the head though and some time later I was already Matt and Trey's bitch.

I'm like in college now so don't mind if you see me preaching about society, religion and liberal arts in general.
Top

Hey. I'm SugarCrazy1. Nice to meet all of you.
Top

SP fan since day one. Never really got into forums of any kind. Got extremely bored because my life situation has changed drastically in several ways over the last few years, and I've never been a big 'net guy due to never having time prior to said changes, but now I do so here I be: Mackanelly, biotch! I assure you, I'm not a hologram or a spambot.
Top

Hello! I just made the account today! I'm Yuji and I draw. I'm trying to figure our right now how to set up avatars and basically figure out this entire website. I watch Rick and Morty and I also like most Nintendo games (my two big faves being Zelda and Animal Crossing) I'm hoping I'll remember to come onto this website and forum more, and I'm also hoping that the forum will be active as the new episodes continue to come out. I really like the Goth Kids and also Randy Marsh.

This is one of my drawings, although it's more of a doodle, it's me in the South Park style, which I wish I could recreate more in the Avatar. 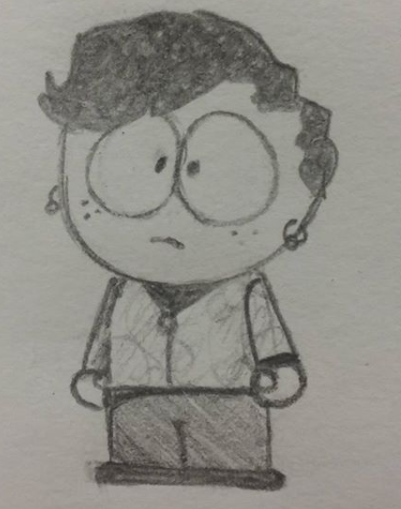 Anyway, thank you to anyone who read this and I'll be hoping to put more content out in the forums!
Top

New kid in the town. Like, legit new. Just made the account today. Been wandering on the forum for long, and been watching SP roughly since the early decade. Now I estimated that it was time to tell you whomst am I x

I would just copypaste my profile description, but I don't feel like doing that.

I am Hubengard. Well, I am not actually named like that, it's just my chosen pseudonym. Hu and Be are, respectively, the first letters of my first and last name, and the "gard" is just because I am fascinated by Scandinavian culture. Because yeah, I am not from Sweden, Norway or...Denmark. *twitch*

I am a literary student from Eastern France, hopefully a future translator. Stan said in one episode (You got Fd in the A, I think) that my country is where all pussies are, however this is totally untrue. Except for me.

When I'm not away from Monday to Friday in my boarding school, I'm at home, spending my miserable life watching South Park and other cartoony thingies, sometimes playing video games, and listening to magnificient music sung in a wide variety of languages.

On the political spectrum I am (very) centrist. I think there are both good and bad ideas in (mostly) all ideologies.

About South Park, my favourite character has to be Butters, which is very queer to say the least because he's literally the polar opposite of who I am. I find him cute overall

Anyway, to the pleasure of seeing you again! Bye...
Mildly asocial fella from France.

My Twitter's there (please do not stalk me, my life's not interesting) : https://twitter.com/AudiseusLSJ