It seems like things will only be getting worse with this Coronavirus COVID-19 pandemic outbreak.

I thought we could all use a thread to share stories and concerns of the virus.

Share them here!
He was a wise man who invented beer. -Plato
Top

I live in Sacramento County and things are heating up.

California has a state of emergency.

There are people with coronavirus at hospitals and self-quarantining in their homes where I live. Someone died of the disease at a hospital where I shop and dine near.

Elk Grove school districts around where I live have canceled classes for the time being.

I know some people have full bans of going outside and going to school or work. Italy is really suffering. I feel Sacramento will end up like that soon.

I don't really know what to do as this thing is too contagious. Will coronavirus be a one time thing or will this be the new normal every year for there to be a COVID-19 flu like season? Will all tv shows, film, and other media now always include coronavirus in all future works? Life sure feels altered significantly.

I wonder if new South Park episodes will be affected as well? We may see the whole season canceled if LA has a ban of people going to work and school.
He was a wise man who invented beer. -Plato
Top

JamesPolo wrote: ↑
Mon Mar 09, 2020 9:04 pm
I wonder if new South Park episodes will be affected as well? We may see the whole season canceled if LA has a ban of people going to work and school.

The colleges I attended are having all remaining classes for the semester to go online.

All sports events are suspending all activities including games. So, NBA, MLB, and NHL are all suffering. What the hell will people do in their free time?

No one from Europe can travel to the US now as there is a ban.

Life is going to be crazy boring if people are only allowed to go to work and buy food or otherwise are forced to stay in their home under penalty of arrest and fine.

I think President Trump may be sick with coronavirus. He has been around a few people that later tested positive and he didn't sound that good last night during his address.
He was a wise man who invented beer. -Plato
Top

If Trump wants to seal US borders, I'll stand by that decision. I don't even like the president, but saving lives is more important being on China's good side. We can't save the world.
Send me a message (PM)
Follow me on Tumblr!
Top 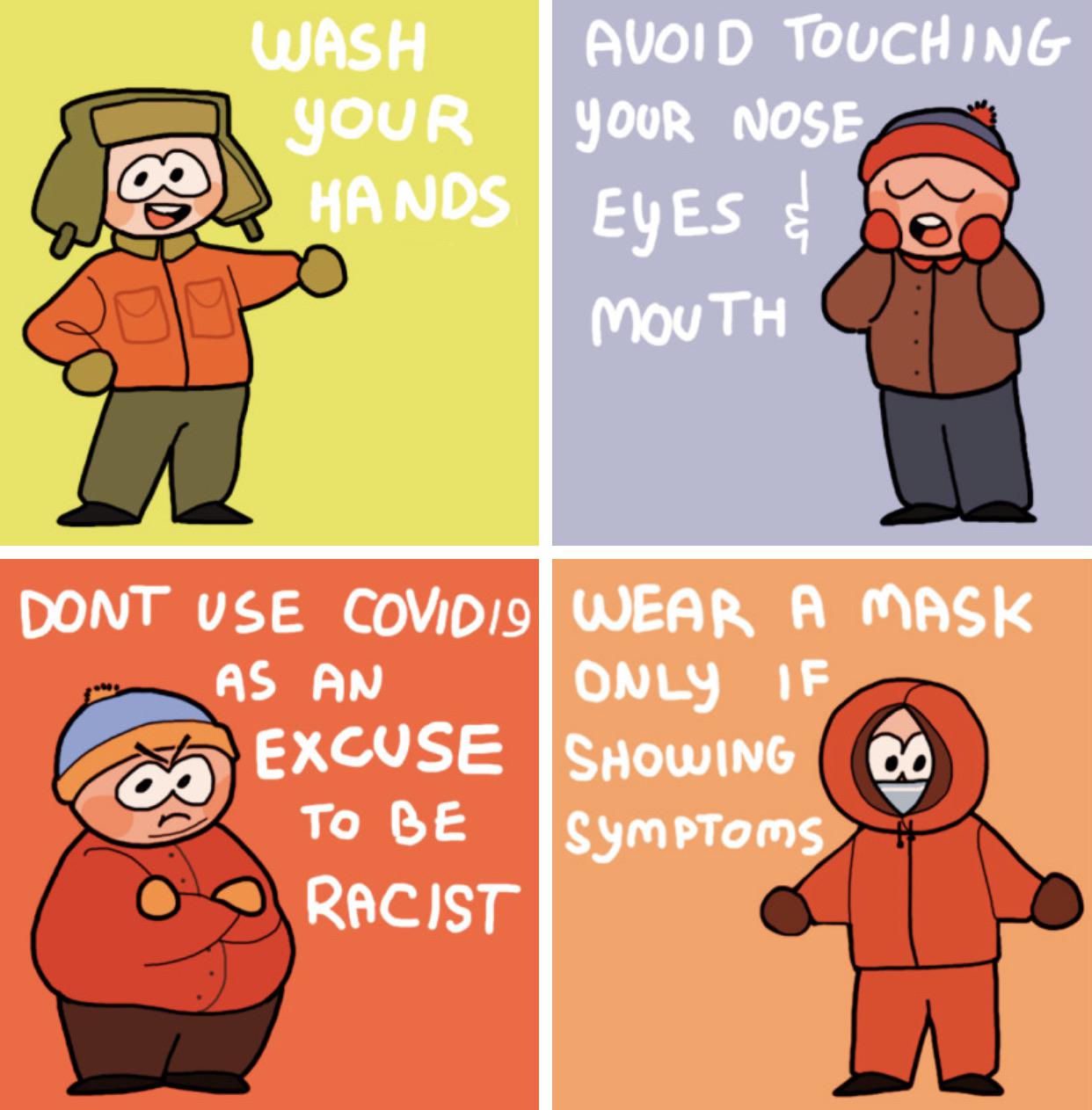 Send me a message (PM)
Follow me on Tumblr!
Top

I can't believe the response that has happened. Our country is radically different now.

I feel bad for poor children who depended on school lunches as food and can't afford meals at home.
He was a wise man who invented beer. -Plato
Top

Trump is maybe going to have the government take control of all grocery stores.

California Governor Newsom is thinking of forcing people 65 or older to not be allowed to leave their homes. Also he wants to close all bars and only allow for now restaurants to allow 50% capacity of customers.

Some states are closing all restaurants and bars. There are going to be a lot of people probably in the millions without paychecks for some weeks, scary.

I don't think I'm going to be able to survive this!
He was a wise man who invented beer. -Plato
Top

JamesPolo wrote: ↑
Mon Mar 16, 2020 5:00 am
Trump is maybe going to have the government take control of all grocery stores.

Nope. If he did that, his base would immediately call him a Socialist.

JamesPolo wrote: ↑
Mon Mar 16, 2020 5:00 am
California Governor Newsom is thinking of forcing people 65 or older to not be allowed to leave their homes.

He's certainly suggesting they don't, but he won't force it.

It started out with Mitt Romney and now even Trump likes the idea. We all or maybe just the people that need it, will start to receive a check for $1,000 a month. It makes me think of Andrew Yang's dividend plan. If I get a check I'll make sure to eat and drink it!
He was a wise man who invented beer. -Plato
Top

Now all restaurants are only takeout only and many are just closed now in Sacramento.

All gyms are closed so now I have no where to exercise. I'm going to get out of shape and fat.

I finally went to a grocery store and it had many items empty or almost. I bought like $180 worth of food and drink.

Things are crazy, I saw a homeless man trying to sell stolen McDonalds toilet paper on the street. I could tell that stuff would make you sick as how dirty homeless are and the toilet paper was unwrapped and exposed.

I officially have nothing to do and am real bored and feeling depression.

I offered to help homeschool my cousins young children so I guess I will start doing that during the mornings. At least that will help me be with others and help pass the time.
He was a wise man who invented beer. -Plato
Top

I just found out that Sacramento has an order for people to not be allowed to leave their home unless for essential purposes. So, I will not be able to teach my cousins kids.

I think I'll take a break from new episodes of South Park and I'll write a children's story instead for the next week.
He was a wise man who invented beer. -Plato
Top

Man, everything sucks now. Work is dumb. Going to the store is dumb. People are idiots. Especially the fat, old, orange guy.
There's nothing to do but sit around and watch TV while drinking mind-numbing amounts of alcohol.
(Actually, most of that was true before the pandemic.)

Is it because people are shitting their pants that all the goddamn toilet paper is gone?
At least traffic is awesome.
I hope the telecommuting thing sticks around long after this shit is over.

I love how socialism was such a scary word for all the Trump Chumps, but it's the only thing that's going to keep people alive right now. And all those progressive ideas about mandatory paid time off and free health care aren't looking so stupid right now are they? The cost of not having that already in place is looking mighty steep. But will people think critically enough to notice? Probably not. All the rubes will once again forget that socialism had to save society from capitalism yet again.

I was liking the idea of having lots of money free from the government but now am getting scared. What if this coronavirus thing doesn’t end, what if it keeps running? As far as I know you can get the disease and have it for 15 days but then rate after you can catch it again. I wonder if the first time having it compared to the second or third time if the human body builds up an immunity or if it can be mild one time and severe to the point of death another.

Also, what if coronavirus isn’t seasonal and it is something that is present all year long every day out of the year! That would be scary. That would mean this thing could last for over a year as is what is projected to find a tested cure. Then there is the theory that like HIV or AIDs or many cancers that what if coronavirus has no cure we can find! We would be forever enslaved like this and our world forever changed into a communist draconian dictatorship.

Still, giving everyone free money could cause hyperinflation. Our National Debt would increase by $300 billion a month maybe. We couldn’t really handle that in the long term. We wouldn’t be able to secure a loan and we are already $23 trillion in debt. We would end up like Venezuela.

I think if this thing is going to last a year or more that we should immediately start a new FDR styled New Deal. This would have it where all able-bodied Americans are given essential jobs where physical ability and educational background can serve as qualifications for certain jobs. These jobs would be like running the government, growing food, running power plants and water works, and working at a grocery store and at hospitals and the many other essential jobs we have heard of. I guess it would be very socialist where people live where they are rate now but rent or mortgage free and everyone is given around the same amount of money a month or by assigned occupation and by importance.

This would have everyone working and we wouldn’t have to worry of food and supply shortages and anarchy like if the grocery stores ran out of all food. It would be the worst if supplies run out as people would go door to door killing, raping, and stealing. Now is probably a good time to own or buy a firearm.
He was a wise man who invented beer. -Plato
Top

in my continuing effort to improve my English, I've been watching the american news on youtube. and boy, is donald beyond stupid.

i mean, i always knew he was a moron with a lower than average IQ, but he's said so many unbelievably stupid things these days that i cannot even fathom why people voted him.

seriously guys, how is it possible that such a pathologically narcissistic, dangerous retard is your president?

i'ts not just the infamous suggestion to drink/inject yourself with disinfectant, but also trying to peddle a drug with very heavy side effects (hydroxychloroquine), before even knowing if it's really effective; or also trying to wind down the coronavirus taskforce while still in the middle of the pandemic, only to change his mind 24 hours later because he's been told (in his own words) how "popular it is".

each of the examples above should be enough to never even consider such a person as someone with a right to lead a country.

and beside the single, unbelievably dumb ideas coming out from his mouth, it's also annoying how he's constantly trying to dismiss the covid19 issue as something that just gets in the way of his re-election campaign.

with small hands trump, you have probably reached the lowest possible and imaginable low.

on a side note, it's a pity that we can't get a good dose of clever irony on the whole coronavirus pandemic, seeing as there's no south park new episodes for now.
He is the record!
Top
Post Reply
34 posts