Have a poll? Post it here, and keep all the other forums clean of tons of poll threads!

I hate Cartman. I don't feel like typing out why though....
Top 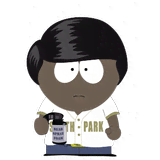 I love him and hate him at the same time.

Cartman is the sh*t.
He speaks whatever the hell is on his mind and he is seriously phsycopathic. Which makes him exciting to watch.

I may be a huge Kyle fan, but it doesn't mean I hate Cartman. I just dislike him (Note: I didn't say hate him) when he does certain things to certain people. For the most part I like him.

..damn that little guy is yet smart but so narrow minded

Cartman's possibly my favourite character, but I hate him with all my heart.

Strange that so many here 'love' him...
Top

cartman is a dick look what he did to kennt,stan and kyle!

If i had a wish i would like it to be..... twin sexy chinesse girls in there short skirt uniform. (splat)
Top

I love Cartman. He's hilarious. A lot of people say that they hate Cartman because he's evil. Well I for one think he's awesome because of it. He's also not as fake as kyle and stan. Unlike stan and kyle who try and convince themselves that they're good people, when they're not and pretty far from it, Cartman willingly accepts the fact that he isn't. Plus, I like how Cartman became amazingly smart in the new seasons and how he uses that to screw over stan and kyle. They deserve it for constantly wailing on Cartman in the first few seasons. Though Cartman is my favorite character, I like Kenny a lot as well. Kenny is cool and funny, and isn't like stan and kyle (the 2 buttbudies).
"Before I jump, I gotta know where I'm gonna land. Because if I land in sh*t, then I'm not gonna jump; because I don't like to clean my shoes."-DK
Top

at first, he was sort of a butthole. but NOW... hes a full blown assh*le. he killed a dudes parent and fed it to him and gave him a basket of stuff to forgive him so he could get into heaven!!!

id say that i hate him in a way that i love him.

guess u could say im neutral

he reminds me of me. the girl whos willing to do anything for 16 dollars. (and 12 cents

)
For a good time, call someone who cares
Top

butters_stoch wrote:he reminds me of me. the girl whos willing to do anything for 16 dollars. (and 12 cents

"Or the black chick you could bang for a Happy Meal."
-- Captian Hero, Drawn Together
What's the difference between a 7-11 and a smurf?

Why would anyone waste time loving or hating a CARTOON character? The question is are you entertained or not?
Everybodys got something to hide except me and my monkey...and now my monkey's acting suspicious.
Top

how can u not like cartman? obvs i dont luv him but come on! he is amazin lol. Hu else wud kill sum1s parents because they scammed him outta 12 dollars(ish)!
Top

[color=darkblue
]THis took me about a second.. CARTMAN LOVER SUPREME!!!!!!!!!
He is the Homer Simpson of this show and that still is an understatement about how significent his status is. It does me proud as a fellow fat ass that all the greatest characters are fat:Homer, Fred Flintstone , Archie Bunker and of course our very own eric.

[/color] [color=darkred]Yes,there are more haters but thet are just jealousy of the best character on the best show television. [color=blue]Hey, i should know i am a yankee fan[/color]. Anyway, Cartman greatness can be seen in his undying passion to keep the fans laughing, screaming or just fascinating in what his lovable rascist murderer will do next. Still, your probably saying how is something so evil this great because think about all those characters who i mentioned before(Homer, Flintstone,Archie)all had someone that support them with unconditioned love no matter what because they see the speck of greatness. Cartman is all alone in his world and like in real life he is in constant pain. Right there, most of our beloved characters will have a happy end not Cartman because he is unlove like so many poor souls in society. So real. So fat. So legendary.

[color=green]Cartman has no one and the debate will be alway their in my heart thinking even if he was the nicest guy in the world, people would still hate him cause he's fat.I think my point is proven by the episode in where the other universe's cartmen, with fashinable goatee,was the nicest guy in his realm and yet was hated more than any other because he's fat aand nice. I have an interesting theory that if cartman was nice he would be a fat version of Butters. Thats why i believe he gets his best pranks on Mr. Stoch because here's a guy who he believes is worse than he(somewhat similar to Kenny) The question will always be there: who insulted who first? --- Kyle makiing fat jokes or Cartman making Jew jokes? Still, there are undienable moments in South Park history when he was responsible for saving the day. I mean this little piggy defeated bothe Saddam in the greatest movie ever animated and Osama bin laden in Classic Biges bunny fashion.
He also was the boy who defined America itself in the show's 100th episode and sacriced his mighty ass in the show's first episode. And let us not forget how many times he saved Kyle, himself!!!

[color=green]in the end, there will never be anyone as unforgetable as the great Eric THEODORE CARTMAN... His athuritha is unmatched by any.
Eric cartman is my hero becaused he knows how it is to be a big bad fat ass. Still, I don't share his hatred of the Jews or Butters but have no problem on the hippies. Eric will always be the man! Respect Eric's Athoritha!!!!!
Top
Post Reply
191 posts