I haven't liked this season at all so far. I haven't laughed out loud once, except for the "Cartman singing about his vagina" comment in last night's episode. Otherwise, not my favorite at all. The earlier ones are the best.
Top

Decent so far. I really like Cash for Gold and Butterballs

First, you should have been paying attention to what Kyle told Stan TWICE during the filming of "Stop Bullying."

Second, if you did pay attention, then you would have to know what Kyle was talking about.

As much as I hate to say it, I have been a hardcore fan for a long time, it has not been good. To be honest, it doesn't even seem like the same show! The characters aren't behaving like their characters and they are putting them in unusual holes. Now Cartman's a jew and they all four have herpies. The characters aren't building like they used too like how Cartman rips on Kyle for being a Jew but doesn't mention that he's a Jew. It feels like all of the episodes are seperate from each other and it's just a series of cheap gags.

I don't know who's writting it now but it's not the same people who used to do it. . .

Yes! I second this thought.

not their best work, so far, but considering all the brilliant episodes they've put out over the years, i'd be hard pressed to criticize anything of theirs. Love to see an episode about the Money Pit, not the movie, but the real Money Pit. Seems like Cartman could devise a way to uncover whatever is down in that hole that no one can get to!?!
Top

Good or bad, this season has been nothing short of weird. At this point, I'm convinced Matt and Trey are on some hard drugs recently. This latest episode seals it. 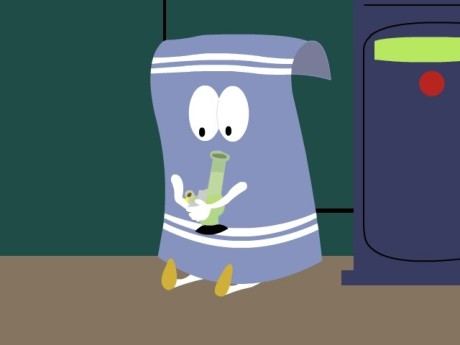 It's funny how people have such dramatically different views on episodes this season.

I think a lot of us on this site have wayyyyy too high of standards. Impossible standards for this show. It can't be the same type of humor and level of genius hilarity that it did in earlier seasons. It just can't. I just take every new episode for what it is: an animated comedy trying to make me laugh. It's been a pretty successful season thus far IMO.

Trey Parker is writing it.
There's more than one person in the "writer's room" bouncing ideas around, and they get credited for their ideas, but Trey Parker writes every word of the scripts. (I would kind of expect a "hardcore" fan to know such things, but maybe I interpret that term differently.)

Ok, so to begin with I think Trey and Matt have hired a team of monkeys to write season 16, and not genetically altered smart monkeys, I'm talking damn near retarded monkeys.
But the monkeys are probably smarter than the people who have enjoyed season 16 so far.
I saw someone give Jewpacabra 9/10 and just thought wtf were you watching!
It was the worst episode I've ever seen, by a mile.
That wasn't the same Cartman that we all know and love.
Faith Hilling started with promise with the train scenes then faded off a bit to a cat that said OlongJohnson? Kinda stupid, reminded me of the most watched Utube clips episode which was pretty funny.
Cash for gold was pretty good a few laughs but overall pretty dumb. Reverse cowgirl not a great opener for the season but it paints a picture of what to expect from season 16.
Finally the Ziplining episode. A few original ideas, but halfway through I knew it wasn't getting any better. Kenny has herpes apparently and Cartman shouldn't be allowed Mountain Dew.
The scenes played by real actors was stupid and hopefully not to be repeated.
South Park got a contract extension till 2016 but if this keeps up I wont be watching, it's sad because up till season 16 it's been the best thing on television.
Top

Trey Parker is writing it.
There's more than one person in the "writer's room" bouncing ideas around, and they get credited for their ideas, but Trey Parker writes every word of the scripts.

Jimbeamo wrote:I saw someone give Jewpacabra 9/10 and just thought wtf were you watching!
It was the worst episode I've ever seen, by a mile.
That wasn't the same Cartman that we all know and love.

It's super funny how one can put in the effort to explain why one is rating an episode a certain way, even though it gets a lot of hate from a lot of people, and then have every bit of it be completely ignored.
It totally was the Cartman we know and love, because Cartman is driven by his self-interest, his fears, and his need to feel superior. All of these traits were fulfilled to a "T" in Jewpacabra, and it was flippin hilarious to watch him do his justification dance. Apart from that, the commentary of the episode was great, whether it was about the Finding Bigfoot guys or the Old Testament. And the look into Cartman's psyche was something to behold. It was very sad to see his deep-seated longing for a father figure manifest in such a way, and very interesting to watch him be overcome with panic before waking up and giving his self-satisfied speech. That is "wtf" I was watching, and why I rated the episode as high as I did.
(I'm totally sure that everyone read that, and it's cleared up any confusion about why I hold the opinion I hold.)

It's fine if you don't like an episode, but it gets really dull to see screams of "OMG, there have been potential changes! How dare they!" Seriously, you guys. Shift happens. It's okay. Please, please find a more compelling argument for your barrel of haterade.

Trey Parker is writing it.
There's more than one person in the "writer's room" bouncing ideas around, and they get credited for their ideas, but Trey Parker writes every word of the scripts.

I think he's losing his touch. 'cause most of the eps in this run seem off the mark.

The first few episodes were not my favorites, but that's happened before, and even to greater extremes sometimes. And, as I've said, I thought "Jewpacabra" was really good. "Butterballs" could have wrapped up a little better, but it was also pretty good, and the songs were just crazy catchy and funny. "I Should Have Never Gone Ziplining" had some good laughs; I enjoy parody.