South Park created a cool new website that has you answer 30 questions to determine what characters you are most like.

My results are as follows:

Roger Donovan 2%
He was a wise man who invented beer. -Plato
Top 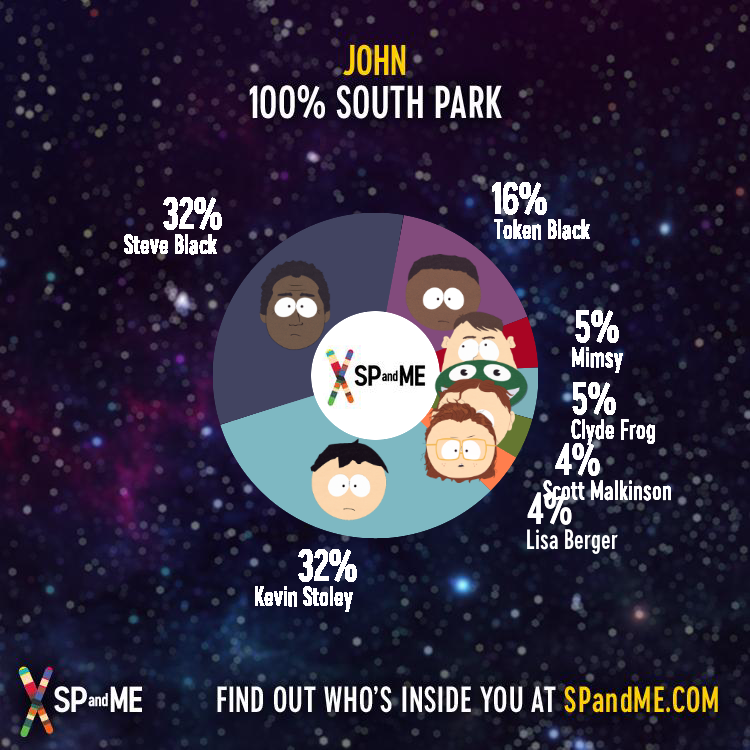 This was my little pie chat, with Kevin Stoley coming out almost on top. No clue why I seemed to match so strongly with Token's Dad, even after reading his description.

I had a lot of fun with this tool. There's about 128 profiles/blurbs in all, transcribed elsewhere here, and many of them now added to the wiki here. Whoever wrote these has my imagination!

FIYI, seventy-two of those characters were in Stick of Truth (counting the critters separately as the game does) and seventy-one of them, not necessarily the same list, appeared in the Fractured but Whole game.

Boiling it down though, the only one to really, really surprise me being missed here is Mayor McDaniels, FYI.
South Park is a platform for Matt and Trey's social commentary and satire; there is no canon and these characters only serve as tools for self-expression. Don't get attached.
Top

I must be getting old and I must be the "straight man" in the classic comedy duo sense.
Two of my top three are moms:

Cupid Fatass? That feels like a dig. And Autumn? Well I could probably keep up with her at the bar.

The real joke is on the makers of this little quiz. I'm not signed in via any social media BS and I'm currently running a VPN so they fished no data from me with this quiz.