If Cartman has Asperger's, he may finally get a little sympathy from me. I also can't wait to see what happens with Stan. This one looks like it could be pretty good if Cartman's plot isn't totally stupid and inaccurate.

Honestly, I have hardcore aspergers. I've dealt with it all my life. It's actually the reason I am here in the first place.

But I really am more interested in what is going to happen to Stan than I am in the aspergers part of this episode.
Stan and Kyle :)
Top

it's going to be interesting, more cause people will be more interested in the side story (Stan) than the main. Maybe Kyle and Kenny will notice the void of Stan in this episode and try to get him back, or this episode will be a bridge between 1507 and 1509 where they get Stan back.

I'm guessing that stan will be trying to revolve his cynicism up to the last episode of the season. Maybe they will have a few episdoes linked and some big thing happening to get stan back.

Also, as it's year of the fan, I hope we get some more classic characters. I WANT TWEEK BACK! He's become too minor. (And I know it's a long shot but do you think there is another person with an Isaac Hayes Esque voice for chef?)
Top

just as long as it's not left in the urinal.... mmkay

I am happy South Park is back! For those of you who are "offended" or "upset it's about Cartman and not Stan"... just watch and laugh. Mmkay?
Top

I think it would be pretty slick if Cartman used the diagnosis to validate becoming more of a shut in, toy collecting, perverse waste of flesh a la Chris Chan. http://www.sonichu.com
Top

The one called Howdy-DOOdy? It's more than just a possibility. Ask Wendy TestASSburger!
Top

I'm going to go ahead and guess that Cartman, Kyle & Kenny get 'Ass Burgers' from all the sh*t they've been exposing themselves too.

Super Jew wrote:I think it would be pretty slick if Cartman used the diagnosis to validate becoming more of a shut in, toy collecting, perverse waste of flesh a la Chris Chan. http://www.sonichu.com

that would be beyond awesome . i totally hope they make a CWC / Sonichu reference !!!!

Yay! Finally, I can't wait. I wonder if Cartman's going to fake it or if its going to be diagnosed in the episode?

Okay, that prediction time that I love so much has finally arrived! My best guess is that the story will obviously start out with either Eric or Stan. Eric will misbehave somehow and need to be diagnosed, ultimately he is told he has Aspergers syndrome.
Or alternatively, he wants to be diagnosed with the syndrome. Maybe he needs to get out of class, makes up a condition, nurse or doctor proclaims it's Aspergers and Eric is stupified. Somehow Kenny and Kyle see this as something cool and want to join him. Or maybe, just maybe, Eric, Kenny and Kyle are trying to win back Stan by using aspergers as a way to fix him, but I doubt it.

From the looks of it, Stan seems to be traumatized by everything that's happened to him. He's seeking guidance from Mackey, but I again doubt this will do any good, unless Mr. Mackey decides to drug Stan.

I don't know if Clyde frog will play any role in the episode, if he does it must be linked to Cartman's new found goal to have aspergers.
Considering SPS took the liberty to say, "Will anything ever be the same in South Park again?" I say no. 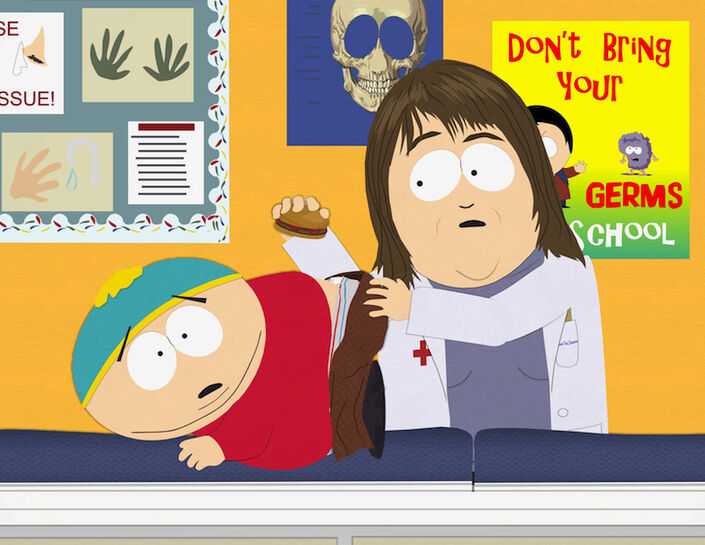 South Park is amazing and anyone who doesn't think so should learn how to Respect My Authoritah! LOL South Park Rulez!
Top

Fatass is the anti-Aspergers. He is literally the opposite of that condition. What ever the opposite of Aspergers is, that's what Fatass has. I think it's called "being a horrible selfish dick to everyone and everything".

The one called Howdy-DOOdy? It's more than just a possibility. Ask Wendy TestASSburger!

Neckbrace wrote:so
five f*cking months of waiting and crying and agony
and then cartman episode
uhm