Should Kenny Take of his orange sweater more often? 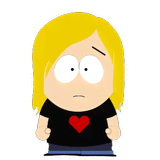 Yeah, he should. We've seen wear it for all 10 seasons, and we've seen him without it in the movie and only 2 episodes. I'd like to see him without it.
Top

Haha, the guy who posted only once to say "no" a billion times is funny.

Anyway, like some other people have said, I don't think Kenny is himself without his parka. It's quite fun to figure out what he's saying sometimes (although some other times, I can hear what he's saying as clear as day). Most people who watch South Park and even those who only caught a glimpse of South Park know Kenny as the guy "in that orange sweater." It makes him unique; without it, he'd be like... the other guys. o_o;

I'm not saying he should NEVER take off his parka. I mean, I suppose a few more episodes is fine, since we've only seen him without it on The Jeffersons and The Losing Edge, (and the movie) but I wouldn't want Kenny unhooded for ALL future episodes.
Top

true, true. but i think they should at LEAST make him more of a character.....ever since kenny came back, he just seems more like an extra. he barely has any lines! that makes me kinda upset...kenny is a great character!!!!! i'm just saying that since they have kenny back, they should have him as a regualar character again!!!!! dont any of u agree with me?