I miss those episodes. I used too tell all my friends that South Park is MORE then just spoofing real life events, but now, these last few episodes are making me feel otherwise.

I only saw up too the first commercial, but I'm very "0_o" about where M&T are going with there characters. I mean last episode was shocking enough(Stan pulling a gun on Kyles head), but now Butters was being forced to smoke(where the hell did cartman get those cigarettes?) and IKE of all people had sex. I was hoping it would be someone at least old enough too know what sex was.

And in the first half of season 10, Kyle had acid. Sure, these are THERE characters and not mine and they can do whatever they want with them, but they are only 8/9 years old. Doesn't anybody think they're going too far by making them so many "adult" things?

Bah, maybe I'm just thinking too hard on it, like I said, I didn't even see the whole episode(could't stay up anylonger). :cry:
Top

never seen the dog show but didn't have to - Cartman, hilarious

like, it actually has some "Simpsons" substance - it's great

after the episode the advertisement was - GO TO THE SOUTH PARK FORUM!!!

Poor, poor Kyle. What a bummer of a week, huh? When your most reliable ally is *Cartman,* things are getting bad. Ike in trouble, Ike telling him "you're dead to me, Kyle," Ike running away--and Kyle just loves Ike. If Kyle were a real kid I'd have to stand him a large milkshake.

I think they did have to downplay Stan. If they showed *more* Stan, it would be impossible to explain why he wasn't helping. He did looked stunned and upset, that's about all he could do.

I don't think we'll be seeing Leroy, Earl, or Beth again. They're entirely Dawg-centric and I don't think Cartman is still going to be hall monitor next week. Just as well because I find Beth a little disturbing: luckily Cartmans's ideas about sex are still a bit primitive and seem to involve pee, i.e., still hasn't a clue. Also yet another time Cartman has gotten religion.

I thought the choice of Ike as the student was both the most messed-up and one of the funniest things I've ever seen. I *am* a teacher (in college) and I have absolutely zero tolerance for this sort of behavior. There's always some kind of excuse and Matt and Trey rang changes on them all. Picking Ike made it so outrageous that it all sounded ridiculous (Kyle: "He's a little young for you, don't you think????") but also pulled out of what we already know about Ike--he's intellectually well ahead of his age group, but he's still a baby. I was kind of pleased to see Foley and Gibson get nailed, too.

And Butters: poor thing, just having a cheerful little whiz and suddenly Cartman crashes in and wrecks his life. And then he's the cameraman. Figures. Some would say that if Beth is Dawg's bitch , Butters is Cartman's.

Favorite quote so far: "Ike, you need to have a life, have fun, and *then* ruin it by having a serious relationship." Word.

Well, next week, I guess it's back to normal, whatever that is.
Top

Shiek927 wrote:
but now Butters was being forced to smoke(where the hell did cartman get those cigarettes?)

That... isn't that new a concept. Huey Lewy and Dewy were beat up and forced to smoke by their Uncle Donald in one of the old OLD disney cartoons. You know.. back in the days when freedom of expression was still a respected concept.

Ike having sex... dude it was funny because he was the youngest.

Figures. Some would say that if Beth is Dawg's bitch , Butters is Cartman's. 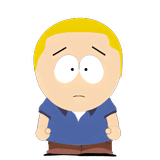 Shiek927 wrote:And in the first half of season 10, Kyle had acid.

All the points you guys are bringing up; the decharacterization, the adult activities, the satirization, have all be subjects of lengthy debates on this board. You can search through any of the old official episode threads to find them.

Wow...another great episode! The only one of season 10 I don't care for much was Smug Alert! But so far this season has been great! It matches up to the greatness of season 8 I believe. ANyway....9/10
Top

Ok, I haven't read through all of this thread, but please tell me I'm not the only person who thought that was TOO messed up. It had funny parts and it could have been absolutely hilarious, but what I don't understand is, why the f*ck did they have Ike going along with it? That was just stupid. Complete decharacterisation. I can never look at Ike in the same way again now.

That episode would have been absolutely classic and near flawless if the teacher had been expressing her love for Ike, while he didn't have a clue what was going on and made his usual comments like "I go poopies". But Ike will probably never be funny again to me. The fact that he willingly had sex with his teacher has made that quite clear.
If you can be bothered...please check out this poll:
http://misterpoll.com/4270026923.html
Top

who do u think the teacher is sleeping with?

Good, but not great. The A-B storylines felt like something I could have created; more of a discredit to the SP writers than a credit to me. The episodes I appreciate the most are waaay out of left field, the ones where I'm like, "how the hell did these guys come up with this stuff?"

I also felt like the ending fell flat, no pun intended. I figure they chose Ike because his character best embodies innocence, but there might have been more comedic value with Butters instead of Ike. I realize that Garrison is Butters teacher, so maybe that contributed to their decision.

The episode was a topical overload--but still better than pretty much anything else on the shit-tube.
Top 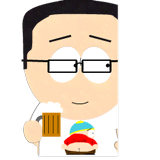 I cringed at the Ike/Teacher material but it was so funny and well done and yet sent a message. But I do have to agree with some of the posters here about the constant bashing of recent events. Tsst was probably an episode which didnt really touch on that but still parodied Dog Whisperer. I think most of the episodes these days bash something and anything... and I dont think they'll change simply because they get free publicity. And who wouldnt want that?
Top

Publicity is one thing, but after all the wanted and unwanted attention South Park got with Season 9, I was hoping M&T wouldn't mind one year where the show wasn't the center of both good and bad attention. A year where they make episodes of kids just being kids(Lord of the Rings episode) would have been VERY nice
Top

I was very pleased with the amount of inside jokes and absurdities, therefore I really enjoyed the episode. This second half of season 10 has so far been very clever and pretty funny and even though I had some doubt before the season begin, i'm finding that i'm enjoying this second installment more than the first . However, Return of Chef is my current favorite episode of Season 10.