A farm next to Cartman's house 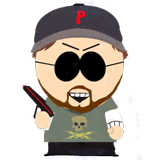 A farm next to Cartman's house

A farm gets hauled next to Cartman's house. Then, the area where the farm used to be gets replaced by Big Gay Cowboy's Gay Country Clubhouse. At 5 in the morning, a rooster goes "cockle-doodle-doo." Then, a farmer gathers up the cows, pigs, and sheep while these animals go moo, oink, and bah. Cartman wakes up hearing those sounds and yells, "GODDAMMIT! MOOOOM! CAN I SLEEP SOMEWHERE ELSE! I'M GETTIN' SICK OF THOSE F*CKIN' FARM ANIMALS!"

The next day, Cartman complains about the farm to his friends at the bus stop.
They suggest that he figures out a way to move to another house. He says that he can't but he wishes that he could.

At 5 in the next morning, Cartman hears the farm animal noises again and says, "I am sooooooooo pissed! I'm gonna sleep in the attic!" Cartman tries to get through the attic door but he gets stuck. He yells, "GODDAMMIT! MOOOOM! CAN YOU GET ME OUT OF THIS DOOR!" She tries to pull him out, but he yells, "OW! OOOOOOOOW! IT STARIN' TO f*ckin' HURT!"

The next day Liane calls the principal and lies that Cartman is sick with the stomach flu. That is so the firemen would not cut Cartman in two. Later that day, Cartman yells "MOM! I GOTTA GO TAKE A sh*t!" Liane brings the urinal to the closet. Then, Cartman sh*ts in the urinal and falls down to the floor. Liane carries Cartman to the bed and takes off his shirt. She sees a ring around Cartman's waist and puts some medical spray on the ring. She says, "I gonna go out and bring home some Kentucky Fried Chicken. Okay, sweetie pumpkin?" Cartman says, "Okay, Mom." Before Liane opens the front door to get out, she hears Cartman yell, "OOOOOOOOOOOOOOOOOOOOOOOOW!"
Liane comes to Cartman and says, "Are you okay, Eric?" Cartman says, "The pain! It hurts like a f*ckin' son of a bitch!" Liane says, "You need to relax. Are you gonna be okay?" Cartman says, "I'll be okay, Mom." Liane hears a knock on the door and finds out that it is the FBI. The FBI reports that they have just arrested the members of the Gay Country Clubhouse for having sex with children.

While Cartman and Liane have KFC for dinner, the gay house is demolished and the farm is moved back to where it belongs. The next morning, a circus gets moved next to Cartman's house. Cartman wakes up hearing the noises of monkeys, walruses, lions, and elephants and yells, "NOOOOOOOOOOOOOOOOO!"
Then, the ending credits appear.
Top

Re: A farm next to Cartman's house

His attack, his goading and his quick departure from the discussion...clearly demonstrates that [Mr.Hat_DX27], like Stovepipe_Jam, Killahertz9, TheTowlieConnection and others before him, has no integrity.
Top
Locked
2 posts • Page 1 of 1