Wolfaxy wrote:OMG! In "The Coon" comic, anyone else notice the ad for the Sea People (thingies)?

No, I didn't. Wait until I see it again. I'll be looking for it. Thx

Much better, Will. Thanks

That's a neat trick you have

CON/WTF MOMENT
MBC BEING THE HERO AT THE END? AND HAVING ACTUAL POWERS?

Sure, why not? Classic ending for stories - the surprise ending! Used a lot in the various Star Trek franchises, and notice the two Star Trek geeks from earlier seasons were in last weeks episode.

KENNY COMMITING MULTIPLE SUICIDES
EVEN THOUGH I FOUND IT KINDA FUNNY WHEN HE DID IT AT THE END SAYING IM GOING TO BED SHOOTS HIMSELF BUT DAM I FEEL BAD FOR HIM AND IM TOTALLY CONFUSED ABOUT HIS POWER IT DIDNT EXPLAIN WHY HE HAD IT OR ITS PURPOSE. IT ONLY HINTED THAT THE PARENTS SAID WE SHOULDNT HAVE WENT TO THOSE CULT MEETINGS AND SHE SAID IT HAPPENED AGAIN WHEN SHE WAS HAVING KENNY AS A BABY HINTING SHE KNOWS HE DIES AND COMES BACK

There was a previous episode in South Park years ago (Season 4, Episode 6: Cartman Joins NAMBLA where Kenny died, his parents had a new baby, decided to call him Kenny, and his father mentioned the following, (courtesy of Big-Will's Scriptorium), at http://www.spscriptorium.com/ScriptGuideIndex.htm :

[Hell's Pass Hospital, Delivery Room. Mrs. McCormick has a new baby in her arms, and Stuart looks at it with her]

Stuart: Oh, he's so beautiful. I know it's been hard on both of us losing poor Kenny. But this new baby kind of reminds me of him.

[a shot of the baby reveals a boy in a little orange parka with the hood tight on his face, like Kenny before him]

Mrs. McCormick: What should we name him?

Stuart: Well, seeing as though Kenny passed away, maybe we should name him ah,… Kenny.

Stuart: God, this must be the fiftieth time this has happened.

(I [zzyzx 1] added the "white" above for emphasis; it wasn't in the original)


Notice in this episode this evening, 1413, Kenny's dad wrapped the baby in an orange parka

bluefartsmcgees wrote:MBC GUY TALKING TO WHAT YOU THINK IS KENNY BUT REALLY IS SPEAKING TO MBC

Classic Star Trek and many short stories I have read, where the point of view (POV) the reader is taken to by the author is suddenly switched to the POV somewhere else. I have always found that to be the mark of a great writer because it makes the reader surprised and enhances the pleasure of reading, or in this case, watching the episode of South Park

Skipping to the end of your post, bluefartsmcgees because I largely agree with what you said (and no reason to repeat it here):

bluefartsmcgees wrote:ONE MORE THING I THINK I SHOULD MENTION THAT I DONT THINK ANYONE CAUGHT IN THE LAST ESP REMEBER WHEN CARTMEN AND HIS "COON FRIENDS" WERE WALKING DOWN THE STREET TO GO TO THE MART AND CARTMEN NARRIATES SAYING HE HAS TO DO SOMETHING ETC AND THEN KICKS BRADLY AND CLYDES AZZ WHILE PLAYING MUSIC IN THE BACKROUND PLUS ITS IN SLOW MOTION WELL I RECENTLY NOTICED THIS IS INFACT A PARODY OF A SCENE IN CLOCKWORK ORANGE WHRE THE LEADER OF THE 4 GUYS PUTS HIS DROOGS IN PLACE CAUSE ONE OF THEM HE GOT PISSED THAT HE WAS GIVING ORDERS TO THE OTHER GUYS WHEN HES THE LEADER NOT THT GUY SO HE KICKS THEIR AZZES IN SLOW MOTION PLAYING THE SAME MUSIC HERE IS A CLIP ON YOUTUBE OF THAT SCENE

This was discussed quite a lot in the 1411 post-episode thread starting here with this post.

Welcome to the board, bluefartsmcgees

I think the Coon and Friends Trilogy was a clear indicator that SP is running out of ideas or maybe going through a dry spell. There were tons of characters that didn't get resolved, plot twists that went nowhere and an ending summed up in less than 10 seconds. It's like we got setup for an awesome 3rd episode and instead, received a quick and directionless filler-episode in the season.
Top

Anyone else think it sounded like he said "human ki*e" @6:41? It rhymes with bike.
Top

chonus wrote:Anyone else think it sounded like he said "human ki*e" @6:41? It rhymes with bike.

Just love the coon episodes. Hope the last one will end with a good theme. Thanks a lot for the best tv show ever.

But they completely explained Kenny; ~13 minutes, where Henrietta explains the Necrinomicon, they show a page with 6 people in cloaks doing some summoning stuff around a baby in a pentagram. This, along with Kenny's mom insisting she should have never joined that cult, implies that Kenny was prolly part of a ritual intended to summon the old ones - that is why he is neither alive nor dead.

My guess on his friends remembering him after he died for several months was that he is remembered until he re-births; he was only shown rebirthing right after killing himself, but hours could have passed between the events, or in the case of the several month hiatus, several months. Perhaps he gets sent to the Nightmare City of R'lyeh between deaths and rebirth? It will be interesting to see where this goes...
Top

What more can you want??!

*i've always been a kenny fan, + one * for making him the coolest south park caracter

I knew that Mint Berry Crunch's powers were real as soon as the camera cut off right before he spun around and said shalom (or whatever), and Kenny's face was priceless when he realized that guy was talking to Bradley.
Top

Haha, neat-o!! So cool how Mint Berry Crunch was a main character! He rocks! XD And I just loved the boys talking about their super powers and everything. They were just little boys who were doing it for fun all along yet pass off Kenny who has real powers and just don't get Bradley's. Poor Kenny shooting himself!! I felt so bad for him! Stan and everyone freaks out when he dies yet they forget all about it the next day! No wonder he's so peeved. How could they not remember??

Bradley is Henrietta's little brother!! How cool! Didn't see that coming. Love the Goth Kids. I expected a bit more struggle and action when the boys were transported to the other world. I wanted to see them actually having to fight for their lives.

Again, Cartman being cute is very demonically cute. ^_^ And deluded as usual, thinking he's the good guy the whole time and his friends had turned evil and everything.

I wish Kenny had a bigger BAM kind of moment. I thought he was going to be sacrificed to Chtulu. (I was thinking it's Harry Potter all over again! lol) But Bradley was the real hero all along. It seemed too simple how he saved everything in the end but, he's a real super hero so...
But Kenny's deaths seem more- pointless now. Since he wasn't sacrificed and just ended up dying and coming back to life yet again. But I'm happy he didn't die for good. Again.
Last edited by Stanluv25 on Thu Nov 11, 2010 8:54 am, edited 1 time in total.
I love: Stan, Butters, Cartman, Sharon.

You all realized Kenny was reborn when Cthulu was sent back right? Kenny = Cthulu.
Top

PPS: I was expecting Clyde to cry once they were transported to the demonic world.

Kenny = Cthulu, that's why he remembered the place and was reborn when he was sent back.
Top

Hey, look at this! 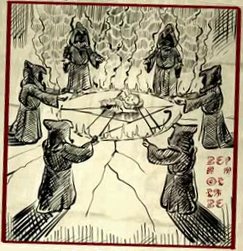 This is from one of the pages of the Necronomicon. Do you see the infant in the center of the pentagon? Henrietta says that people have been trying to summon Old Ones for years. Could Kenny's immortality be from an attempted summoning?
Top
Post Reply
372 posts