They won 8 I think tonight....Which is pretty badass (I know they were up for 14 but you can't win them all lol).

So happy they won best Musical, best "director of a book" and for best sound. Plus they won the best actress as well so I'm pleased. Congrats to Matt, Trey and the crew on a solid job well done!

Congrats Trey and Matt, you both totally deserve it

They also both independently of each other (different times going up for awards) thanked the South Park Fans! {that's us

Nikki M. James thanked the bubble bee; no one told them they couldn't fly, so they do fly! No one told Nikki she couldn't do Broadway, and here she is

And that scene performed tonight from The Book of Mormon, reminded a little of some scenes with Sally Struthers and Starvin' Marvin

All the musical numbers in SP over the years; indeed in ESM; all lead to The Book of Mormon. Congrats again, Matt Stone and Trey Parker

Oh, did you notice when Robin Williams presented an award? (I forgot which one now, I may edit this poster later

) He prefaced every Broadway Show he was presenting to with the words: "The Book of"; not just "The Book of Mormon," but EVERY entry he did this

The Book of Mormon looks hilarious! Only musical I'd bother seeing, just not into Broadway. Congrats!!!
Top

I REALLY FREAKIN WANT THE DVD !!! I listen to some songs on youtube ( PLEASE DONT BRING IT DOWN :'( ) And it rock sooooooooo hard !

AND GO DO YOUR MUSICAL IN MONTREAL !!! AT JUST FOR LAUGH COME OOOOOOOOOON !!!

At least in 2-3yeras ! COME ONNN Do the cirque soleil way and multiple it !!!

Gratz to all the nominations and winners. From the one performance of I Believe, I wouldn't mind seeing the whole thing live. Hoping it comes to the midwest.

About 65% winning the nominations in the 65th Tony's. Very impressive.
Top

nall started an official thread on this:

(Well, not on the 65th awards, but on The Book of Mormon specifically:

nall wrote:You should see it.

btw, I posted this pic from tonight's show in that thread as well: 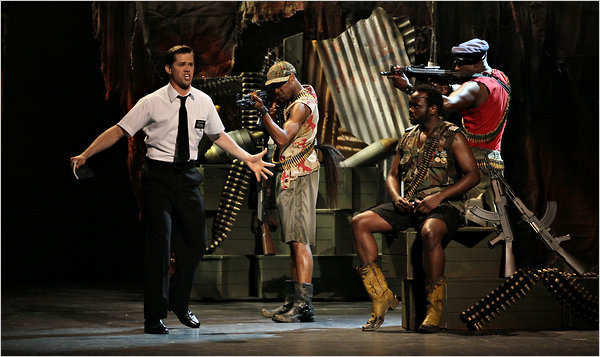 The Book of Mormon original broadway cast recording available at amazon for $1.99.

The special offer will be available through Monday, June 13 at midnight, Pacific Time.

I forgot to mention the highlight of any of Trey's acceptance speeches:

Check out this article. Very funny, and sweet.
Top

The special offer will be available through Monday, June 13 at midnight, Pacific Time.

Check out a little article I typed up on my site about the event.

http://main.nimrodstreet.com/book-mormo ... ony-awards
“The basis of all reasoning is the mind's awareness of itself. What we think, the external objects we perceive, are all like actors that come on and off stage. But our consciousness, the stage itself, is always present to us,” Trey Parker
Top

^ very cool, for showing your support!

i found this awesome site as well: (sorry for the curse word if it's against rules for the forum)

Damn Cynthia, watch your f*cking language. LOL that's ok and thanks so much
“The basis of all reasoning is the mind's awareness of itself. What we think, the external objects we perceive, are all like actors that come on and off stage. But our consciousness, the stage itself, is always present to us,” Trey Parker
Top

CartmansWhore wrote:Not watching but I feel the love all the way to here!

I was just on FB congratulating them and there's been word that tix for BOM are going up for every win. Wow, not good for me esp since I have to pay rent very soon after my vacation.

I just checked the site; ticket prices are the same. premium seats are now $377 for certain dates (holiday season i believe). Anyway basic nose bleed section seats are still $69. Pretty much sold out through Apr 2012. I checked because I have never heard of a show's ticket prices going up just because they win a Tony or two. The demand sure went sky high, didn't it?!

I guess I'll just have to see it when it tours. Sad; I wanted to see the original cast that worked directly with M&T. Call me a crazy fan, but the touring cast won't be the same =(
Top
Post Reply
36 posts